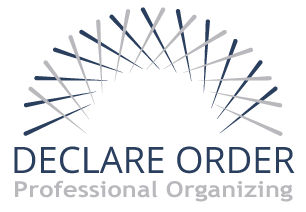 Declaring Order in a Storage Room – Praying for Daylight!

It is always smart to start a large project the day before garbage pick-up day : )
One day, three garbage cans, and four recycle bins later…

Patches of empty carpet emerge in the holding area!

“Leftovers in their less visible form are called
memories. Stored in the refrigerator of the mind
and the cupboard of the heart.” ~ Thomas Fuller

Once the garbage, recycling, donations, and large obvious items have been removed, it is time to tackle what remains.  More on that tomorrow.  But first, we have that industrious kid again!   The first set of empty shelves inspired him to play and create a bunker for his toy guns.  Now, the empty shelves have inspired him to move his nerf gun ammunition in.  He is enjoying the cleared out space.

Has clearing out your storage space ever been inspirational for YOUR kids?